The seniors are reading graphic novels. We started with Pride Of Baghdad by Brian K. Vaughan and illustrated by Niko Henrichon, an allegory at the open of the Iraq war in 2003, told from the perspective of lions just freed from the Baghdad zoo. 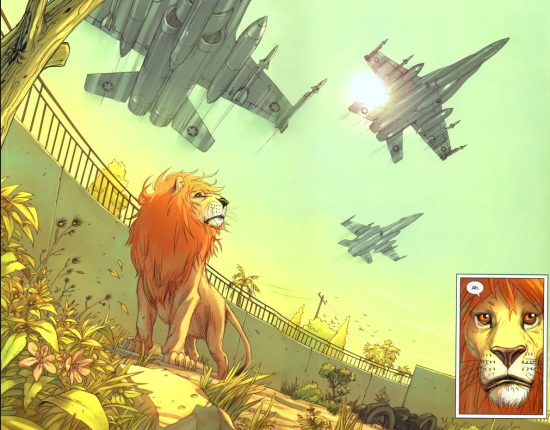 Pride Of Baghdad reveals a little more story with each reading. I like that the characters, setting and plot quickly engage the reader. You want to know what happens as the pride navigates a city under attack. But second and third readings add dimension. There’s the allegory to explore, sure. And since this is an introduction to graphic novels for some students, I like that the rich illustrations tell as much of the story as the text. This is great book to discover the craft of graphic novels.

Now we are reading Persepolis: The Story Of A Childhood by Marjane Satrapi. From the opening page:

What I enjoy about both Pride Of Baghdad and Persepolis are their regional relevance to my students. Last year we read V For Vendetta whose strong (albeit complicated) story and theme was lost on some readers, due in part to its so-so illustrations. So this year we swapped in Persepolis, a book typically taught at lower grades. Some of my students read the book previously but still reread the whole book. And a few students are now interested in Persepolis 2. What I enjoy is the conversation generated by literature that feels familiar. I like that a few seniors discussing Pride pointed out Arabic translations of speech or signs in the book, things I miss as an American English reader, like the meaning of the name Fajer (the moment at the edge of dawn), which open to different questions or interpretations.

Persepolis challenges a lot of ideas about the role of religion and government in a society. At points in the story I’m sensitive to its danger. Particularly the protests and persecution portrayed – we live in a country where speech isn’t totally free. We don’t often address that in class. Another grade twelve teacher pointed out how much influence the Islamic Revolution had on all countries in the region, perhaps most visually in the veil many women now wear. My classes haven’t discussed the book as a whole yet and I’m not sure what connections they’ll make between early 1980s Iran and their own country but but in the several years I’ve been teaching here, gender inequality comes up regularly as a regional issue.

One more graphic arts recommendation is Zen Pencils, a weekly comic (is that the right word?) by Gavin Aung Than. This is such a neat site. Than illustrates quotes and literary excerpts, showcasing a range of styles. One of my reader/ writer loves is to look at an author’s collection of work to see his or her development as a writer. Zen Pencils is a tidy record of Than’s creative experimentation and growth. A couple of entries I like are 162. Sir Ken Robinson, 161. Shonda Rhimes and 103. C.S. Lewis. And one of Than’s favorites, 128. Bill Watterson. I also appreciated this introduction to the artist:

I am writing thirty-nine narrative pieces to celebrate this year, my thirty-ninth.

This is a lot of work so expect the draftiest drafts! Yet, as I develop craft (or bulldoze my way to a word count), find a little art too.