Postsecret flash fiction! I wrote the following over two days. Minor edits, no major revision yet. 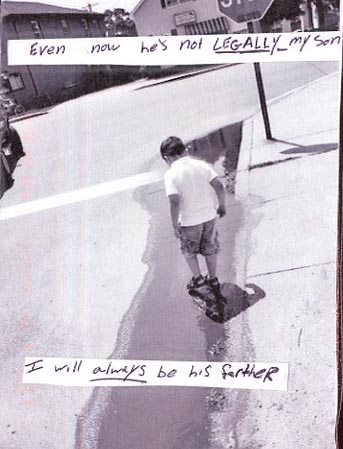 First He Was A Gift

Every Father’s Day Chelsea emails me. For two years it’s been the only time I hear from her. The first Father’s Day, she sent a long email about our baby who wasn’t ours anymore. She picked a couple from West Bend to raise our son and we signed the papers because we thought it was best. The couple stayed in touch with both of us. They invited us to Matt’s baptism and first birthday. That first Father’s Day was a couple of weeks before our son turned one and Chelsea’s email was one long apology why she couldn’t see him again. I went to Matt’s birthday party alone and helped in the kitchen, clearing plates and pouring soda for all of Matt’s little cousins.

I get that Matt belongs to Teo and June. They’re great parents. Matt gets a regular life with a big lawn and family vacations. At his first birthday, June gave me a hug and started to cry. For the first few years, Teo and June sent me photos or called to say Matt’s first word was bird, which sounded more like “buh” but they knew he said bird. I saved their messages, showed Mom. At the end of my junior year, Teo met me for breakfast at a diner. They were moving back to California, near June’s parents.

I couldn’t swallow. I was afraid I’d choke on egg and biscuit. I took a drink of orange juice. That helped.

“I know this isn’t how you pictured it,” Teo said.

He doesn’t know how I pictured it. I was living in a house with five other guys who didn’t know I had a son. Chelsea didn’t answer my calls or texts anymore and only acknowledged Matt in Father’s Day ecards. Whenever I talked to Mom about Matt, she said I’d made the right decision. Teo and June seemed to be the only people who understood Matt is my son too. But he’s their son more.

“What? No.” Teo put down his fork. “Her parents are in their late seventies. Her dad has back problems.”

“I’m sorry.” I knew it wasn’t nice to ask. We ate a little more. Then I said, “I just wondered. I don’t tell people I have a son. Mostly because I don’t know how to talk about Matt being mine and not mine. I just wondered if you feel that way as a dad.”

Teo gestured for more coffee and a waitress came by. She left and he leaned back in the booth, looked up at the ceiling tiles. “I wasn’t on board with an open adoption. But now I can’t imagine not having you as part of us.” He looked at me. “I haven’t slept, thinking how to tell you we’re moving.”

Later that morning I sent Chelsea a message, invited her to see Matt before he moved. He was almost three and loved airplanes and avocados. That was stuff dads know. Chelsea didn’t get back to me so the next weekend I drove over to West Bend and had a picnic with Teo and June and Matt. No one cried. We ate peanut butter sandwiches and apple slices. I pushed Matt on the swings and chased him around, caught him and tickled. June suggested I go get ice cream with Matt and the two of us walked across the park to a little shop.

I didn’t want Chelsea to have the baby at all. I wanted her to get an abortion. She said she couldn’t do that. For a few months she talked about keeping the baby but she had a good scholarship. She wanted to study music theory, go to graduate school. She said her head cleared and handed me a folder about adoption. One day she came to my house and asked how I’d feel if she picked a couple who let us know the baby. “We don’t know what we’ll feel when we see our boy,” she said, “We might not want to give him up. That happens. I’m afraid of feeling that way.”

I wasn’t afraid of feeling that way. I was afraid of other things, like how Chelsea was moving to New York for college or how I’d ever have sex again without freaking out we’d make a baby.

At the ice cream shop, I lifted Matt up to see the flavors. He leaned forward, put his hands and face against the cold glass. I asked for a chocolate cone. “And your son?” the woman dishing asked. I let it play. I asked Matt which color. “Blue,” I told the woman.

When we got back to our picnic spot, June had packed up the cooler. She and Teo were laying on the blanket looking at the leaves and sky. Matt ran when he saw them, snuggled between them and pointed up. I couldn’t hear what they were saying. I felt like I was interrupting, to step closer. June sat up and waved me over. This is how it would always feel.

Matt was born the day after graduation. Chelsea called me at five in the morning. We were doing this together, she’d always said. Mom drove me to the hospital and I found Chelsea in her room, laying on her side and doing lip exercises like she was getting ready for a choir concert. Her mom was stroking her hair. “Hi Mrs. Stephens,” I said. Chelsea opened her eyes. She said, “I’m dying. I’m literally dying.” Her mom said she wasn’t, take deep breaths. Teo and June were on their way. I hadn’t met them yet. Chelsea showed me a picture when she brought the first round of paperwork for my signature. She promised me they were nice, even a little rich. When Teo and June arrived, Chelsea tugged on my shirt. “Please, don’t let them in. This part is mine,” she said. Mom went out to meet them in the waiting room.

That part was hers but when Chelsea started to push, it was mine too. It was like my body lifted off the floor. Chelsea was pushing and grunting while I felt high, like I might drift through the ceilings and floors above. When the doctor held up our son, he was red from his first breaths and crying. That part was mine. I cut the cord and followed the doctor to the little plastic basinet where a nurse cleaned him, measured and weighed his tiny body that I helped make. The nurse swaddled him and asked if I’d like to hold him and then he was in my arms, still wailing, his face bunched up. I turned to show Chelsea but she wouldn’t look at me or our son. She was crying and the doctor was looking between her legs. Her mom shook her head at me. For a minute or two, it was only Matt and me. I thought we might both float away.

Teo and June came in with flowers for Chelsea. She was sitting up, hooked to a saline IV. She was pale. June took her hand and tried to talk. I was sitting in the rocker with Matt. That wasn’t his name yet. Teo stood next to us and said the baby was beautiful. I know people say that about babies, even scrunched babies born with misshapen heads, but it was true. Matt was beautiful. He was beautiful to me because he was mine. June kept trying to talk to Chelsea. Our moms looked from one person to the next. No one knew what to do, especially about Chelsea. I said, “Could you please leave us alone?” and everyone left, even the nurse. I carried Matt over to Chelsea and said, “Look. This is our baby.” She turned her face away, closed her eyes.

“I know,” she whispered.

“Please, Chels, hold him.” I held him over her body. She opened her eyes and looked at him. When she moved to see a little to see better, I put him in her arms. For a moment she didn’t move or speak. She kissed his forehead. She touched his cheek, the shell of his ear. She put a finger to his tiny lips. She looked up at me, shook her head a little. I took him back. She looked at the two of us but didn’t smile. “We can’t do this,” she said.

I looked down at Matt, a name he’d be given in honor of Teo’s grandfather, and thought what I’d name him. Until that moment I held him, I hadn’t really conceived any love for my son. I hadn’t thought what it’d feel like to see the baby Chelsea carried through our senior year as a little person I’d want to know, care for, hold. But Chelsea had thought what that’d feel like.

“You can’t do this, Andy.” Her voice was faraway to me. Mrs. Stephens came in then, and my mom. Chelsea said, “He wants to keep him.”

“Tell him he can’t. We already agreed.”

“I know, Chels,” I said. Mom put her arm around my shoulder. She asked to hold him. Then she gave Matt to Mrs. Stephens. I stood with my arms at my sides. Mom hugged me like that. She said I needed to let Teo and June have the son they’d waited for. She said she knew this was hard.

You know in movies when a guy gets in a car and drives around for hours like he’s really thinking about something important? I did that, but I can’t remember what I was thinking about. I walked out of the hospital and drove all over southern Wisconsin. I got as far as a sign that told me Iowa was eleven miles away. When I got home that night, Mom was waiting. She wasn’t worried or mad. It was the first time I felt like an adult, when she came to the front door after I pulled into the drive and motioned me to sit at the picnic table in our front yard. She said, “Your son is a gift.”

June was smiling. Teo lifted his head from the blanket and smiled at me too. Matt rested against Teo’s chest. I sat on the grass next to them. I didn’t know yet if I’d go to my advisor and ask about California tuition, or that it’d be too much. I didn’t know if I’d call Chelsea and tell her the ice cream shop lady knew Matt was my son. I didn’t know if I’d fly out one day to celebrate Matt’s tenth birthday. I didn’t know if Teo and June would message me less and less frequently until one day, suddenly, my son (their son) was fourteen and asked about me. I didn’t know if Matt would miss me after a fishing trip together when I told him, for a moment, I wanted to keep him for myself. But he was a gift first.

I wrote and posted thirty-one narrative pieces to celebrate my thirty-ninth year. So close.

That push to generate work feels good – I like to set a deadline or an arbitrary word count. The exercise of Thirty-Nine Stories revived my desire to connect more with other writers.

I am forty now and pursuing an MFA in fiction.