Prague’s old Jewish quarter is one of few that mostly survived Nazi occupation. The Old Jewish Cemetery dates to the fifteenth century, packed with stones, graves layered according to religious law when more land could not be purchased. I wanted to see the stones crammed and leaning under the shade of trees, roots and graves underfoot.

I wasn’t prepared for Pinkas Synagogue though, the first building we walked through. Panels of lists of names are painted onto the walls of each room, recording the Jews from Prague and surrounding communities who died in concentration camps. It took me a moment to know what I was looking at and then I read the dates following each name. I remember visiting the Vietnam War Memorial in Washington, D.C. when I was twelve or thirteen and feeling a similarly slow absorption of how great a loss was suffered. Name after name after name. 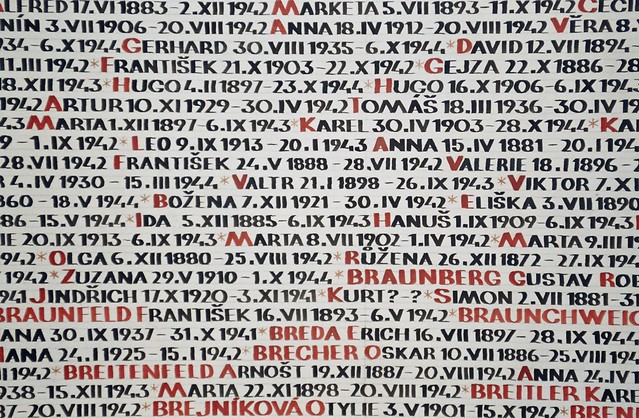 Photography is not permitted inside Pinkas Synagogue. This image is pulled from Flickr.

Pinkas Synagogue also featured an exhibition of artwork done by children at the Terezin or Theresienstadt Ghetto, a transit camp for Czech Jews run from 1942 – 1945. The room was small, displaying a fraction of the art created by the thousands of children moved through the ghetto, but the pieces showed a range of subjects: life before, places left, holidays, transport trains, family, fairy tales, Bible stories, life in the ghetto. A small placard next to each painting or drawing gave the name of the child, their birth date, the date they entered Terezin, and for the majority, their death date and the camp at which they died. Only a handful of the works had a placard ending with Survived.

I read a short explanation of the purpose behind art classes for the children. Elders in the ghetto recognized that children were as susceptible to depression as adults and saw art and poetry as expressions that could give children ways to remember their former life and think about their present reality.

I will write about this more, in my WP. I am a little too scattered to post more than first thoughts now – art, expression, permission. I stood still, looking at drawings on cream paper, thinking about the wisdom of handing a child a pencil, telling them to draw what they may not be able to say in words.

This collage is by Ruth Gutmannova. She was born in 1930 and died at Auschwitz in 1944. I bought a reproduction of one of her watercolors. This collage pulled from the blog The Delights of Seeing.

I wrote and posted thirty-one narrative pieces to celebrate my thirty-ninth year. So close.

That push to generate work feels good – I like to set a deadline or an arbitrary word count. The exercise of Thirty-Nine Stories revived my desire to connect more with other writers.

I am forty now and pursuing an MFA in fiction.